Get it? Mayflower. I’m so droll.

Yea that isn’t a quote that is at all applicable here, but starting your post with a tangentially relevant shibboleth is a tried and true internet writing mechanism. Rust settles in and you need to stretch out the mind muscles.

Instead of wracking my brain for a more on point statement I’m just throwing up that seasonal cliche and doing my best Elongated Man impression as I stretch the premise beyond what is reasonable.

Note: Elongated Man, I should mention that if anybody brings up stupid Reed stupid fucking Richards and his stupid movie power about warping the space around him and appearing to stretch his body into impossible forms and impossible lengths, I am going to officially denounce all things l5r forever. 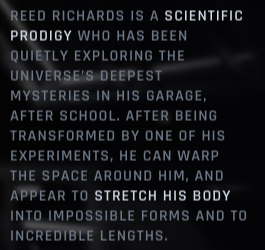 Dude, were have you been? What happened to all the article content? What’s up Buttercup? Burned out all ready?

No not at all. Quite the opposite. Also, yes. The problem with writing about l5r, is that it takes time away from all the other l5r fun stuff you do. There are cards to organize, builds to construct, decks to test (we don’t video everything, indeed, we don’t video most stuff, because seriously, people couldn’t handle just how much l5r Jesse and I play), and general hi jinks to be had. I’ve been so consumed with l5r the last few months that I simply haven’t had the time or desire to sit down and type out all the brilliant wisdom I want to impart. Of course, that only explains a little bit of it. Playing l5r and talking about l5r and playtesting l5r, that is not the great true cause of the radio silence. Indeed, testing for a kotei, even one in a weird limited format like what I won in Highland, lends itself incredibly well to all kinds of posts about tactics and strategy. What doesn’t lend itself so well to open discourse is what I was most involved in. My super secret guilty pleasure. The real pastime I’ve been indulging in. Designing l5r cards. 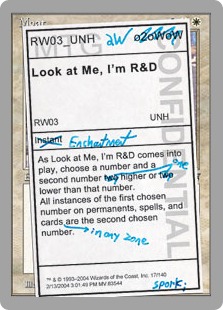 It is all Woz’s fault. Sometime in the past, I’ve lost all true sense of time scale, he mentioned that on the big mothersite there was a call for an open position on the PDT. By rule, I am not a company man. I don’t see myself that way. I have at various points in the games history been asked to look at a few things here and there and test out a few concepts and give feedback, all informally, all lightly, all just friend to friend stuff. I have never been an official playtester, it is never been important to me to help develop the game as a property. I love the game, but I just want to play it. If it is terrible I will play it (though probably not as much) and make fun of it. If it is awesome, I will just keep on grinding my opponents into dust. With a big old smile on my face. Design though, that is an interesting idea, and I’m not the same young buck full of piss and vinegar that I was once. I wear big boy pants now, and work with people all grown up like, and Jesse and I have designed card sets for fun in the past. Kwame edition, named after Detroit’s mayor at the time, who represented a lot of promise. It was a great name at the time. Not so much considering how things worked out for him and the city.

Wait until they see me reboot!

So, I dialed up the modem, connected to Prodigy, hopped onto the information superhighway, logged into my hotmail, and sent over to Bryan Reese an email. It was short, for me, which is still long when compared to everyone who isn’t me, so probably 1000 words, written in my standard rat a tat machine gun like prose. Thoughts come, I write them down, editing is for chumps.

The email went something like this: You should pick me! I’d be awesome! Pick me! PICK ME! LOOK I AM WAVING MY HANDS WHY DON’T YOU LOVE ME!

I didn’t actually think I would get picked, because, ya know, at least 3 or 4 dozen people are going to submit an application and a bunch of them will be playtesters who Bryan Reese will know a bit more clearly in terms of online future set management. I know Bryan some, in the way you know people who you’ve shared a hobby with for 15 years, so I figured I would at least make it to the second round of auditions whereupon I would dazzle the judges with all of my spec work for Onyx. The reintroduction of the Naga. The elimination of the Mantis. Lots of opportunity there. So after sending off the email I got busy working on all kinds of themes and mechanics and cards so that when I got my call back I would have words and words and documents and documents of stuff to demonstrate both my interest and ability.

It was a cunning plan. Did you spot the flaw?

I coulda been a contenda

Turns out AEG isn’t American Idol. There is no second round. There is just an email you send out into the ether. Time you spend working and honing and editing on your personal design ideas, and then!

I’m a gamer. Losing comes part and parcel with the hobby. I lose all the time. It tuns out, shockingly enough, that some women in fact are immune to my charms. Rejection is something I can handle. My self esteem is sturdy enough to endure a few hits, but man, there is no more frustrating response than the form letter rejection. The impersonal, “we are choosing to go another direction”. Ouch. Design is a creative process. It is work. Time spent there is time not spent on something else. I wasted a lot of time. I’m sorry. It stings that it was all pointless, all that energy devoted to a project no one is ever going to see or care about. Lessens the enthusiasm. I wasn’t a runner up. I was barely an also ran.

It is enough to make a guy disconnect from his favorite hobby for a few weeks (months?) and focus just on his local scene. The only place in the world running a regular 65/65 pseudo-highlander multiplayer format which turns out to be totally delightful.

Who needs Modern/Big Deck/Extended/Strict. If you want a fun, fulfilling, flexible format for l5r unlike any other. Multiplayer is the way to go.

One day, this will work…

Time marches on. That kotei in New Orleans that you bought the airplane ticket to. It isn’t still two months away now, is it? If you seriously plan on competing, time to get it together. Turns out the format hasn’t evolved at all in the last few months. This is bad thing for the game overall, but selfishly a good thing for you right now. Makes testing a lot easier. The problem is structured in the design of the Ivory, stop! Stop that right the hell now! No more thinking design thoughts. You aren’t worthy to wield that hammer. Focus on doing what you do. Winning tournaments with Crane and then being insulted by Crane players for not being a true Scotsman. No one likes you. Maybe if you updated your site a little more.

I’ll be fine. As long as New Orleans is exactly like the one depicted in the Simpson’s version of Streetcar.

10 days out. That is about all the time you’ve got left. Better make it count. There is no email Bryan Reese could send, no insult he could throw, no further humiliation he could levy that will take away the enjoyment of prepping for and participating in an l5r event.

Besides, he didn’t mean to cause harm. He takes real good care.

I’m not an addict. I can quit anytime I want.