So I went to GenCon and played L5R. How novel! Would you travel 3000 miles and pay thousands of dollars to go to an L5R tournament? No? How quaint. I would. I did!

This is not my tournament report. I’ll write that later, and I have a lot to say about the event(s) themselves. Right now though, I want to talk about the 80 that I played, the format, and where control fits into everything.

Some people are loyal to factions, others to victory conditions. I’m loyal to an idea: fun is zero sum. If my opponent is having fun, I cannot be having fun. It’s simple math: there is only so much to go around. I have to grab as much of it as possible, before you are able.

So I play control.

L5R has a strange relationship with control. Players of The Game That Shall Not Be Named have made peace with the fact that control is part of the field, but that game is much different. It’s defined by a long chain of 1 for 1 interactions that begin and end, but don’t really link together. L5R is more of a long continuous exchange. A snowball rushing down a hill. Two kids scrambling to build the best pillow fort. Every play is a pillow in the wall (all we are is just another pillow in the wall), or a foot of snowy mountain. Strategies that attack a player’s ability to accumulate resources over time attack his ability to participate in the game. One boxable personality can’t go the distance by himself the way a 1/1 can in that other game. Control has to be, well, controlled.

But where there’s a will, there’s a way. For a while, it seemed design was balancing control by refusing to print engine cards. No Daigotsu Dojo, no Bayushi Sunetra xp2, no Yajinden. We get Planted Evidence, but that’s it. If you want to splash it you can, but all you get on the dynasty side is M’rika xp. Of course, we broke that anyway, but it seemed like a good idea at the time (shout out to Sorrowful Prayers).

20F was shaping up to be pretty boring on the control front. We lost Planted, Sorrowful, A Magistrate Falls… pretty much anything that made life worth living. I bought samurai and attached followers. Dark times. But there were pieces, and they stayed on my radar. Shosuro Longji. Good, but only 6 duels. Not enough to go all the way. Tairao had the potential to be a recursive engine, but getting the guys to assign was a hassle. Plus, sometimes the guys were really big. Quoi faire?

The pieces came slowly but surely, each new set a slow drip. Goju Kumoru was a huge breakthrough. Combine with Ninja Shapeshifter and Tairao and you could kill everything. But it had a 2 honor hit which meant you can’t do it forever. Paul started out of Dragon for Ring of Water move home and good defensive Come One at a Time via Togashi Ogure. Seems all great, until you remember that Nexus of Lies is legal and people play it all the time. Losing 2 from Kumoru was possible, losing 8 was not going to work. 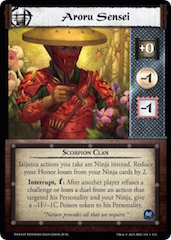 The last big breakthrough was the printing of two sensei that interact with Kumoru: Aroru Sensei and Yajinden sensei. Both reduce the honor loss on Kumoru to zero, and allow you to use the combo to grind out your opponent.

We actually stated with Yajinden sensei, because the deck seems to make more sense out of Spider. The guys are cheaper, the box ability is great for sitting around and drudleing, and you can fetch your combo pieces with Visions of Darkness. The downside is you can’t run Ninja Shapeshifter (not shadowlands), you’re soft against honor, and you always have to play from behind.

A few expensive, explosive cards that punish opponents for loading up a single personality and getting in there early are critical for control decks. Dynasty side engines lock out the game, but if that’s all you have, you’ll always lose. You need something to break the tempo of your opponent early, and put him into a position where he’s vulnerable to being ground out of the game. Cards like A Magistrate Falls, Kolat Assassin and Test of Honor are exactly these. But 20F doesn’t have any of them.

What it does have is Shosuro Longji, Do Not Delay! and Sanctioned Duel. While they’re not as what we’ve had in the past, they allow us to clear out a couple big headache threats, and set the stage for locking out the opponent.

The single most important card in this environment is Honored Sensei, and nobody can take a deck unprepared for honor to a tournament right now. This deck is more than ready. Honor puts no pressure at all on our fate hand or provinces, so we get to sit there and prepare. And prepare. And prepare. You opponent will wonder what you are doing. Why aren’t you at table 53? Doesn’t your deck do anything? They will cross. And then finally, you’ll dishonor all their guys with Nitoshi + Shapeshifter, bang them for 9 points of honor loss from 3x Marked Brilliant Cascade Inn, and kill their guy with Kumoru + Tairao for a 4 points of loss via Yogo Chijin. No deck, even with the most explosive turns possible, can gain more honor than you can cause points of loss, and so they’ll start slowly slipping down and down, until the game is over.

Mark is a great role-player in the deck. Against honor it causes extra loss, and once in a while you cash it in as a One Koku to help at a critical moment. But mostly, it increases your province strength. Going all the way with province strength is critical for this deck. In a  way, increasing your PS is a kill effect. If the opponent needs 3 guys to generate 8 force to take a province and has 5, you have to kill 3. If he needs 4, you only have to kill 2. You “killed” one virtual personality by making all his personalities less effective. The goal of a control deck in the mid-game is, after all, to limit your opponent’s ability to interact with you. Kill all the guys comes later, once interaction is no longer mathematically possible. Raising province strength is a cheap and effective way of making all your kill effects even more punishing. 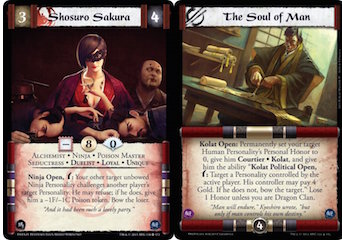 These two cards do the same thing at different points in the game. Soul of Man is an early speed-bump and Longji Setup, while Sakura lets you bow out their board with Shapeshifter and Longji later on, establishing the lock. I made a few mistakes with Sakura and Shapeshifter – there’s a temptation to always copy Tairao and kill guys, but when you’re on the cusp of establishing the lock, it’s more important to play Math than L5R. Figure out which ability reduces the opponent’s force more, and go that route.

You’ll get attacked. The best you can do is make them bounce then punish their bowed guys with Longji. These help them to bounce. Actually I was extremely disappointed with this package of cards. Come One requires you to put Longji into harm’s way, which is never what you actually want to be doing, while Lookout Post was a Hail Mary  attempt to have a bit of game against Mantis. Both should be cut for something with more gusto. No idea what right now. Knife and Withdrawal play double duty as straighten effects for Kumoru, allowing him to be used on both turns. They might be cost of business cards, but I’m not convinced. These are the weakest 12 slots in the deck.

Control decks play a lot of situational fluff, and a lot of bullet cards. You need to get to the bullets. Winning against Honor, for example, tests your ability to draw the Scorpion Armor or Secrets on the Wind quickly. Against military, you need your Longji duels ASAP. Luckily, Brian Reese has blessed us with many ways to go get exactly what we want, when we want it.

The one thing the deck does lack is raw card draw, and that ended up being my downfall in the end. I’d love to be playing a card like Strength of the Fifth Ring, but it wasn’t to be this time around. There’s always Euros!

This deck is the real deal, and could easily have gone the distance in this environment. It has a great matchup against honor (which I fed on all day for my wins), and strong or even matches against most military decks. It punishes slow draws from military decks, and has gotcha yahtzee flips of it’s own. It only stands to get better and better as time goes on and we pick up more and more little pieces.

Enjoy the control deck of 20F! It’s a doozie.